Throughout this article, specific data will be given about the time that must elapse for tomato plants to bear fruit, but first it is necessary to delve into the question, seeing what things can take this time. It's crucial to know to avoid falling into those mistakes!

To begin with, you have to know that not all varieties take the same time to bear fruit, although the differences are usually not very large.

In addition to the differences between the tomato varieties, there are the different growing conditions —one of the most important, temperature—, which can advance or delay the production of fruits and their maturation. Just as the variety has little influence, the environmental conditions do so in a much more notable way.

And the conditions depend on what the local climate is like, on whether the cultivation is done outdoors, in a greenhouse or on the terrace of an urban garden since the insolation, the daylight hours and the temperatures will not be the same, nor on the far.

The incidence of pests and diseases, or low temperatures can slow down the development of the plant and, therefore, delay the entry into production.

In outdoor cultivation, the biggest drawback is usually the low temperatures, that is, sub-optimal. These cause a delay in the development of the plant and, therefore, it will take longer to offer the first ripe tomatoes. 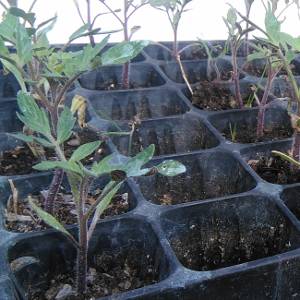 When to sow tomato seeds

✔ Taking into account the temperatures, the period with the most optimal climate for the crop, its dur...

The incidence of pests and diseases is also usually higher, especially if the humidity is high or the plants get wet from rain or dew, but this is important later, in late spring and summer, just when they are growing the first tomatoes.

It is very common that some of the first fruits that set on the tomato plant, or even all of them, go bad due to the fungal infestation of the plant, which makes it necessary to quickly remove all the affected parts. Losing the first batch means a long delay. 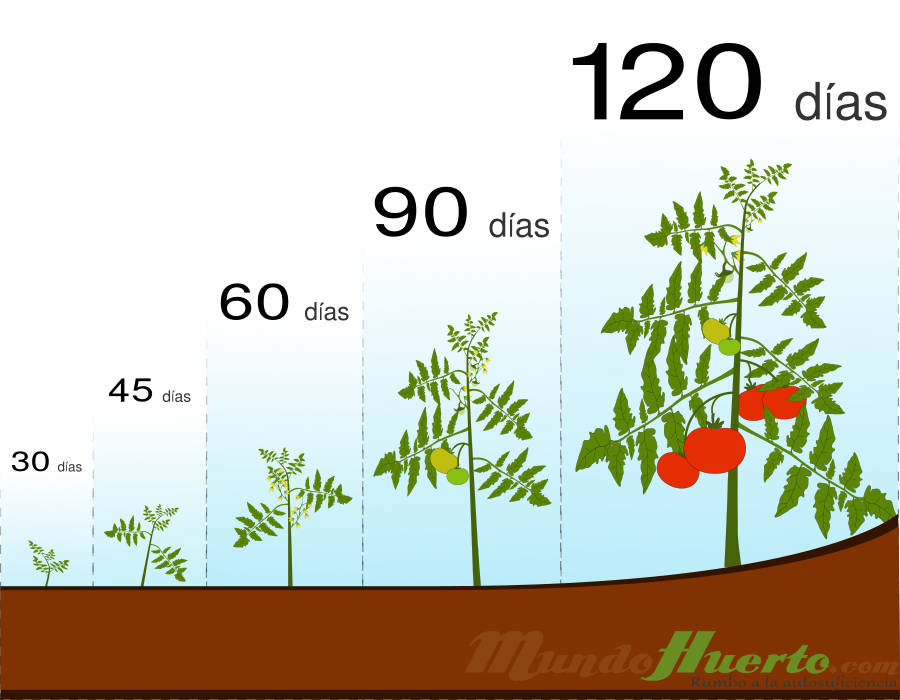 However, in the event that tomato cultivation is carried out in a patio, terrace, balcony, gallery, greenhouse, or any location more or less sheltered from the elements, the limitations are usually different.

In living spaces, sun exposure, water and nutrients, if the substrate is poor or the capacity of the pot is not enough.

When growing in containers, a very common mistake that hampers the early entry into production is the use of pots that are too small and/or inappropriate substrates, with little water retention or low fertility.

In sheltered outdoor spaces, such as a greenhouse, the most important limitation occurs when night temperatures are too cold or when the days are not sunny. The greenhouse hardly heats up if it is not sunny.

In greenhouse cultivation, many hobby horticulturists make the mistake of planting tomato plants much later than they otherwise could, thus missing the opportunity for earlier production.

In the absence of wind, pollination can also be a problem. In the city, pollinating insects can be scarce. Consequently, if the first flowers are not fertilized, they will not set fruit and, therefore, the plants will take longer to produce tomatoes. This can be fixed by shaking the plants a couple of times each day to get the pollen to break loose and travel through the air to other flowers.

Undoubtedly, it is under a greenhouse where earlier production can be achieved, provided that the transplant is done at the correct time, according to the weather of each place. If done well, as has already been said, you can have ripe tomatoes very soon. The higher and more constant temperature, and the lower incidence of pests and diseases, are the main reasons.

Between 20 and 40 days after the transplant, the tomato plants begin to produce flowers and as they are fertilized and the fruit sets, its development begins.

The first time they are grown, it is very common to wonder how long it takes for tomatoes to come out after the flower has withered or fallen off.

Well, only a few days later, a small sphere of pale green color can be seen, in the place previously occupied by the colored part of the flower. That is already the fruit.

And now the next question that usually arises is: And how long will it take from flowering to ripening of the tomato? It depends. This question is already more difficult to answer, because it depends a lot on the conditions in which the tomato is grown. According to our experience, if they are optimal (heat, light, nutrients, etc.), about 4 weeks, if not, it may even last up to 8 weeks.

In general, as long as conditions are favorable, tomatoes will begin to ripen about 3 months after transplanting.

Counting the time from the sowing of the plants in the seedbed, it can be said that the tomato plants take a total of about 4 months to bear the first ripe fruits.

90 days from transplanting to the ripening of the first tomatoes.

But this term should not be taken as something fixed, because later in practice, as already said, there are so many things that can influence that a slight delay or advance is always to be expected, although the latter is less frequent.

How to germinate tomato seeds

✔ Discover how you can germinate tomato seeds quickly and very effectively through a pre-germination process on paper or directly...

✔ Taking into account the characteristics of the chosen variety, and if the cultivation is done outdoors or in a greenhouse...

7 essential care of the tomato plant

✔ Irrigation, pruning, trellising, hilling, weed control, hilling, pest and disease prevention. The most important care that a tomato or tomato plant needs are in this article...

How long does a tomato plant take to produce tomatoes

✔ When the flowers appear, the first fruits, how long they take to mature counting from the flower fall and from the beginning of the crop, all this taking into account the conditions of the place and the management of the tomato plants, both crucial t...

Do you want to know when we publish new content?


✧ We will notify you of new articles...

✧ We will not send you advertising; we promise!

Would you like to share your knowledge or experience with the whole world? Anything to add or correct?


I want to know more

• If it is interesting, we will publish it mentioning you as the author of the content (if you want)