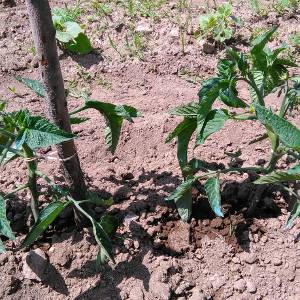 If the distance between plants is insufficient ―very high density―, it is very likely that the incidence of diseases is higher due to low aeration while the plants will compete among themselves for light, water and nutrients, making growth difficult. slower, lower productivity, tomatoes will be smaller, ripen more slowly, and less uniform in size. In addition, the tasks of the crop such as hilling, pruning or staking will become more difficult due to the lack of space between the plants to work.

On the other hand, if the distance between plants is too great, the soil will be very bare and, therefore, more spontaneous herbs will grow faster, while space is wasted ―unless the tomato crop is associated with others such as onion or lettuce.

But let's take a closer look at what depends on whether we have to leave one or another distance between tomato plants, in addition to what we have just seen.

The different varieties of tomato present different characteristics in terms of vigor, width of the crown and density of the foliage and, therefore, before planting, it will be necessary to try to find out the shape that it will have and the space that each plant will occupy.

Based on this, the distances will be adjusted to make the most of the space but at the same time allow an adequate development of the crop. 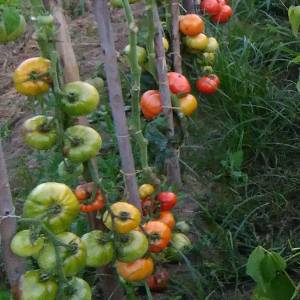 How long does a tomato plant take to produce tomatoes

✔ Too small spacing can delay the start of production and worsen the quality of the tomatoes...

In humid climates it is preferable to separate the plants more to improve aeration and reduce the incidence of the much feared fungal diseases.

- In simple rows separated from 1 to 1.4 m between them and leaving between 30 and 50 cm between plants.

Following this arrangement, densities of between 2.2 and 2.5 plants/m2 are reached.

Since tomato cultivation is one of those that can suffer the most sanitary problems, especially with regard to fungal diseases ―highly favored by high humidity and low aeration―, it is highly recommended to use wide distances between plants, at least 50 cm ―better between 80 cm and 1 meter apart – and, if possible, plant the rows at least 1 meter apart.

How to germinate tomato seeds

✔ Discover how you can germinate tomato seeds quickly and very effectively through a pre-germination process on paper or directly...

7 essential care of the tomato plant

✔ Irrigation, pruning, trellising, hilling, weed control, hilling, pest and disease prevention. The most important care that a tomato or tomato plant needs are in this article...

✔ Taking into account the characteristics of the chosen variety, and if the cultivation is done outdoors or in a greenhouse...

Do you want to know when we publish new content?


✧ We will notify you of new articles...

✧ We will not send you advertising; we promise!

Would you like to share your knowledge or experience with the whole world? Anything to add or correct?


I want to know more

• If it is interesting, we will publish it mentioning you as the author of the content (if you want)